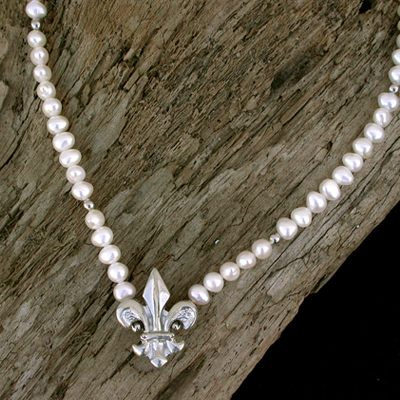 The Fleur de Lis lilly blossom
This signed work by Maurice Milleur™ is an original collection of unique fleur-de-lis designs. The earliest fleur-de-lis dates from 3000BC found on an Assyrian bas-relief. It later spread to Crete, India, and Egypt. The Greeks and Romans associated it with royalty by using it on their coins. Around 1200a.d. King Louis V11 of France incorporated it into the royal French emblem. The St.Louis banner has 3 golden fleur-de-lis on a blue field. This particular design is in our collection of 7. A tropical design based on banana leaves is also included. The fleur-de-lis is a historical symbol of French influence along the central Gulf coast before the Louisiana Purchase of 1803.